The Surprise Ending to Our First Pregnancy

Expectant parents in the movies always experience some sort of unexpected twist shortly before the delivery. It’s usually a silly red herring which gets wrapped up beautifully just in time for the woman’s water to break on a sidewalk somewhere before she speeds to the hospital just in time for a perfect delivery.  My first child’s pre-delivery experience was the opposite. 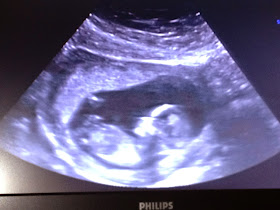 The Little Fetus measured ahead of scale throughout his gestation, so coupled with the fact that he was breach and I weighed 11 lbs. at birth, Mrs. Dude’s OB/GYN suggested sometime during the third trimester that we schedule a C-Section to occur during the 39th week. That seemed like a good option because it also gave my parents who lived across the country fair warning on when the baby would arrive. We booked a delivery date and they booked airline tickets. What could go wrong?

My parents flew from Ohio to L.A., 2 days before the delivery date and seemed tired upon arrival, which was not too unusual. They wanted to rest that afternoon and Mrs. Dude and I still had a lot to do so we planned to meet for dinner. They called shortly before we were to pick them up and asked us to come up to their hotel room before we went out, which was unusual. We couldn’t help but speculate why.

In the movies, this is the scene where the couple joins their parents who sit them down in a serious manner (AKA the red herring) to have a roundabout discussion where they ultimately reveal that they bought the family a house next door to theirs and offer to babysit every night for the next 18 years. Unfortunately that’s not what happened to us.

I don’t remember much of what was said, but two words are still tattooed on my brain five years later: breast cancer. There would be no houses or babysitting or any of the joyous things we’d hoped for that night or in the future. At one of the most vulnerable moments of my life, 36 hours before our first child was born, as my brain rattled with thoughts of insecurity as to whether I would, or could, be a good parent, I was shaken like an old Christmas tree during an earthquake. Only my branches couldn’t shed everything they held. I had to hold strong with every fiber of my being for my wife, my child and my mother.
I don’t remember that dinner or most of the next day, our last child-free day forever. Mrs. Dude and I woke up before the sun on D-Day after not sleeping more than a few hours, which in retrospect was good foreshadowing. We drove silently toward the ocean as the sky transitioned from dark to light until we arrived at the hospital to meet our firstborn.

The delivery went smoothly and I soon held our perfect son in my arms. Shortly thereafter my mother and father did the same. Joy drenched the sterile white recovery room while I anxiously tried to comprehend the circle of life my family was about to experience.


Fourteen months later to the day, I held my son in my arms and we watched as my mother was lowered forever below the frozen Midwestern tundra in a wooden box.